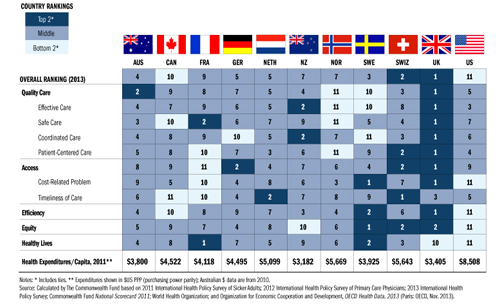 Med school in St. Louis exposed me to a variety of “competing” hospitals. Same thing in Albuquerque during residency, with hospitals spread all over the city. Competition in medicine has always felt odd to me, with “noncompete clauses” in contracts feeling even stranger. I suppose it’s a byproduct of a capitalism-based healthcare system, but at the core we seem to be competing for suffering, as if it’s in limited supply.

If suddenly everyone stopped smoking or drinking, and then started exercising daily, many of us in healthcare could be out of work. So unfortunately, in a profit based system, bad public health can also be good for business. As such, I’m never shocked to see where we rank on global health scorecards, like the one above. And I’m definitely a molecule in this mix.

In a former life in Albuquerque I started a nonprofit, Endorphin Power Company, to help people with addiction problems. During my first year getting started I wanted to collaborate with the University Hospital where I was on faculty. But the COO back then was concerned that our nonprofit would be competing with the hospital. I never got a meeting with the CEO. Being the big county hospital with enormous revenues from the State for indigent care, I didn’t realize that addicts were theirs. I was very naive. Ultimately, our nonprofit worked with Bernalillo County to build a detox/rehab center instead.

Now in my new life in SLO, periodically people ask me whether it’s a problem for me to be a part time ER doc, with Pre-R on the side. Is this a “conflict of interest?” Reasonable question. If you follow my posts, it’s no secret that through Pre-R we’re trying to help people with basic medical needs to bypass emergency departments, to keep their costs down, and to improve care for others with true emergencies.

Our Anxiometer is meant to teach people the worrisome and comforting buzz words of medicine… no charge. We hope to help folks choose for themselves whether to rest at home, call their PCPs, call us, visit ERs or call 911. Prescribing Zofran by phone, or visiting patients at home to run saline, also certainly competes with ambulances, urgent cares and ERs. So why no resistance?

Perhaps we’re just a drop in the bucket, and Pre-R is so inconsequential that we represent no threat. However, I prefer to believe that the heavy hitters feel we’re doing something good. For those of you unfamiliar with the “business” of emergency medicine, I’ll describe my own setup at our local Sierra Vista Hospital.

I’m a member of a group called Central Coast Emergency Physicians. “CCEP” is contracted to staff Sierra Vista and Twin Cities emergency departments, and they are a wonderful group of very smart docs. Before launching Pre-R I asked them their take, and they’ve been extremely supportive throughout. Doctors, nurses and techs simply get it. There’s nothing like spending an hour with a very sick or injured patient, while having the walking well griping in the background about having to wait. Anything that helps care for the latter group elsewhere is more than welcome.

However, that’s just business layer one. Business layer two is the hospital itself. They, like any US healthcare business, both nonprofit and for profit, are keenly focused on both mission and money. They strive for an injury and disease free planet. But no patients means no income, and no business. From the CEO on down, however, Sierra Vista Hospital has been incredible. In fact, they sent someone from the news to interview us a couple months back. Pre-R’s reception has been wonderfully positive. The fact that Vanessa and I had our baby there a few months ago is a testament to how much we like them.

I think those who run Sierra Vista Hospital realize that while Pre-R may be draining some patients, we’re also referring others their way. A few days ago I sent a patient there for an EKG and labs. I’ve also sent in patients who I consider too sick to manage at home. So from my vantage point it’s collaborative rather than competitive. It’s a similarity rather than conflict of interest.

Then there’s layer three… Tenet Health is a for profit corporation headquartered in Dallas, which owns numerous hospitals across the nation including Sierra Vista. This is a realm of management that I’ve never met or laid eyes upon. Pre-R is not even a blip on their radar, but if we were I’d hope they’d like us. Hard to know.

Maybe by now it’s clear how Pre-R can make a house call to run a couple liters of saline for only $250, whereas your bill in an emergency department will be an order of magnitude off. Each layer simply wants and needs to get paid. These layers exist within our healthcare system so you’ll survive when your life is on the line.

For my parting spin, what I’d really like is for each of these layers to consider embracing house calls themselves. Whether we, they, or all of us choose this path, I believe healthcare will improve. Frankly, the alternative model of adding more bricks and mortar just bores me. When patients call today to reserve a place in an ER queue for their conjunctivitis, gastroenteritis, ankle sprains, migraines, common colds, dehydration, why not reply with “no worries, stay put, we’ll see you shortly!”

With or without old school house calls, couldn’t telemedicine extend the reach of every hospital well beyond its concrete boundaries as well? I’m sometimes getting out of state and even out of country consults now.

All in all, competition in medicine just feels warped, especially when pricing is so opaque, and patients are finding themselves making brutal financial decisions between home and health. But with Pre-R we’re trying to make the best of it. However, unlike “peak oil,” unfortunately I think we’re a long way from “peak suffering.” There’s plenty to go around. 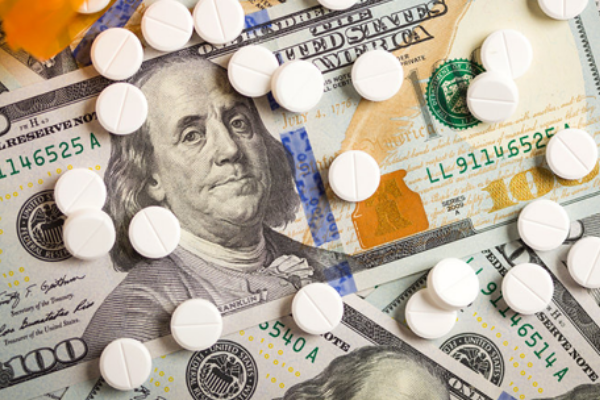 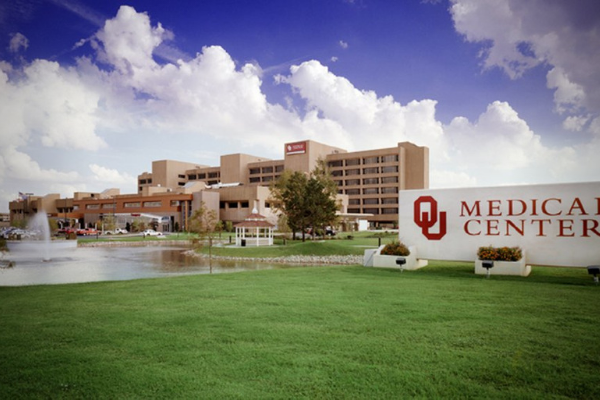 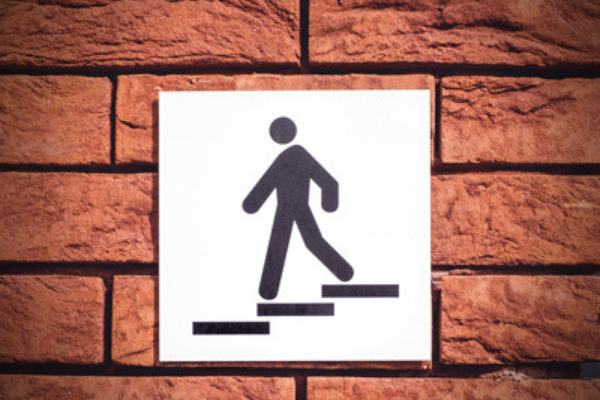 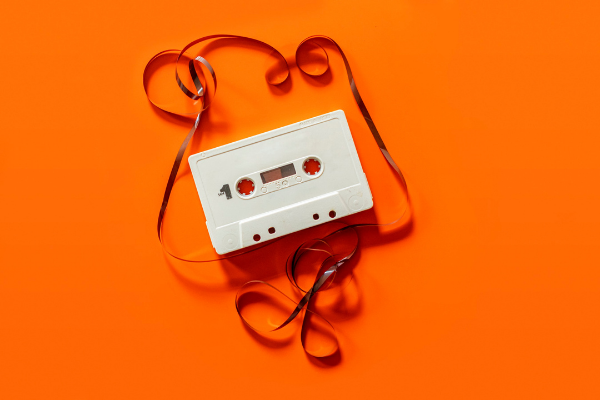 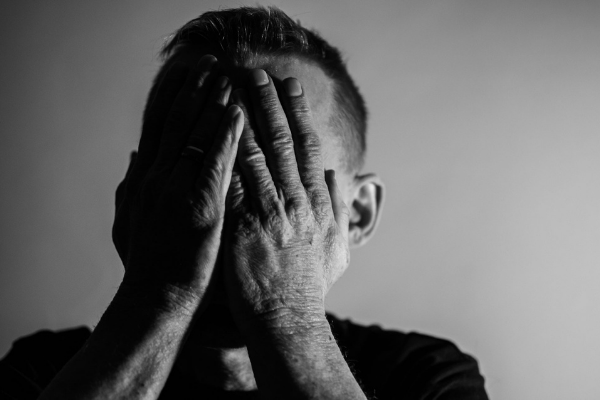 Psyche in the City 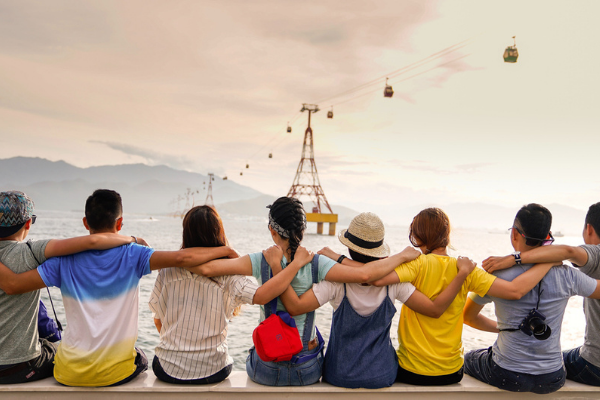